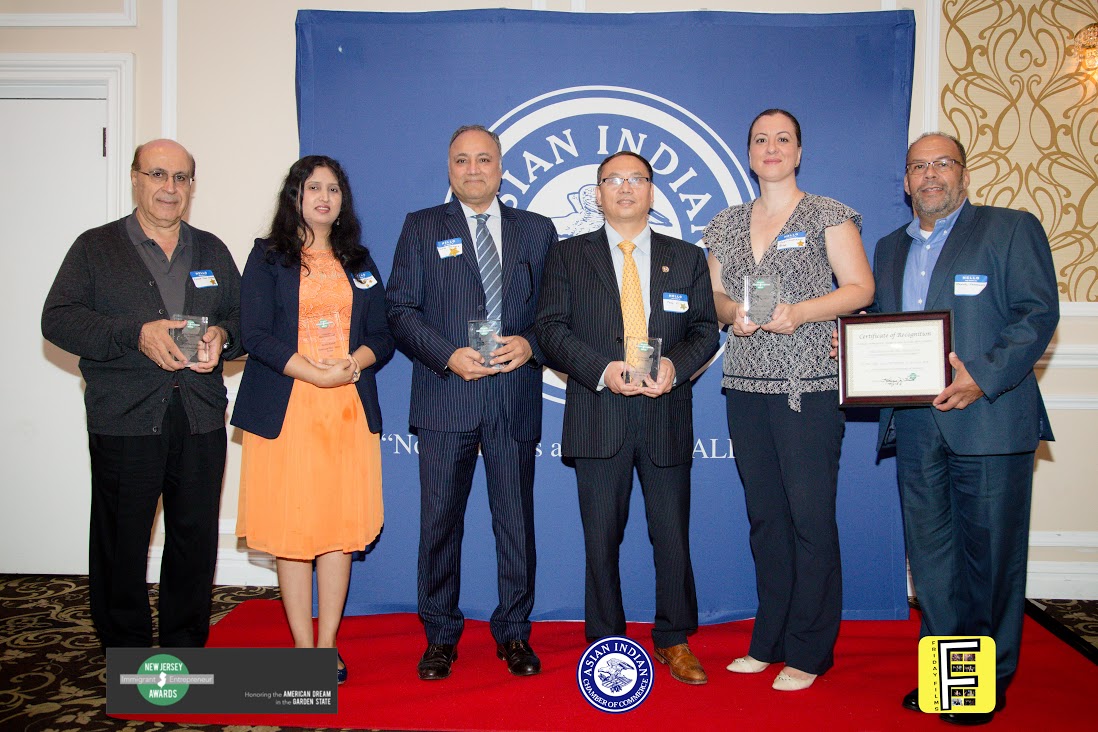 Trenton, NJ (Sept. 27, 2018) – Kamal Bathla, Maestro Technologies,New Jersey was honored with the 2018 Immigrant of the Year at the Sixth Annual New Jersey Immigrant Entrepreneurs Awards at the Asian Indian Chamber of Commerce Multi-Chamber Event in Monmouth Junction on Wednesday.

“We congratulate this year’s winners for their contributions to the State of New Jersey and recognize the importance of immigrants to NJ’s economy and society,” says Katherine Kish, Executive Director, Einstein’s Alley.

The 2018 winners, their NJ business location and country of origin are

Kamal Bathla, Managing Director, Maestro Technologies, Trenton, NJ was honored as the 2018 Immigrant Entrepreneur of the Year. Employing 180 people, Maestro is an award-winning big data solutions and cloud platform company that Inc Magazine named one of the fastest-growing private companies in the U.S. for three consecutive years, starting in 2011. As the Managing Director of Maestro Technologies, Kamal is guiding the transformation of his company, applying its leading-edge expertise in software architecture to big data, Machine Learning, blockchain, IoT and cyber security Solutions. In November 2017, he moved Maestro Technologies from Edison to Trenton, NJ, to an 85,000-square-foot headquarters known as the SMART Applications Innovation (SAI) Center, a nerve center of technological innovation run by an accomplished team of technologists who serve private and public sectors and the communities in which they operate. He is passionate about transforming Trenton to the Innovation capital of New Jersey with technology centric programs driven by public/private partnerships.

Pierre Hage-Boutros, Founder, Pierre’s of South Brunswick, Monmouth Junction, NJ was honored with the Caspar Wistar Award for Growth. In 1990, Pierre bought the Old Butler, a small deli and general grocery and opened Pierre’s Deli adding rooms over the years. He further expanded his establishment, purchasing the property adjacent to the deli and restaurant and opened the bakery. Pierre’s dream all along was to bring together his restaurant, bar, and banquet facilities all under one roof.

Jose Guerrero, President, Chairman and CEO, Spencer Savings Bank, Elmwood Park, NJ was selected for the David Sarnoff Award for Advocacy and Community Engagement. He has been Spencer Bank’s leader for 30+ years as President, CEO and Chairman. He came from Spain when he was 13 and started off as a youth in the Accounting Department and quickly rose up the ranks. He managed all these professional challenges while being both a banker and small business owner.

Jack Li, Owner, Windsor Athletic Club (WAC), West Windsor, NJ received the Albert Einstein Award for Innovation. Under Jack's guidance, WAC has transformed from a gym facility to a true community center employing 98 people. Beyond providing its members with state of the art athletic facilities, WAC is a hub for the local community, serving as the venue for a wide array of events, including local commercial events, political campaign events, an Asian Art show and a college job fair. The WAC has also partnered with numerous vendors to provide Advantage Tennis, Monroe Basketball Academy, International Chess Academy, Princeton Art Academy and a summer camp.

The Rising Star award was presented to Suchitra Kamath, Owner/President, Minuteman Press, Edison. NJ. In 2016, she started her new enterprise, the Minuteman Press of Edison. Before making this career change to a business owner, she was directing and managing global programs for regulatory & policy change for Tier-1 investment banks on Wall Street in New York City. Since she acquired Minuteman Press, it has seen a 500% growth in terms of sales. Due to her quick expansion of her business, she was awarded “Top Achievement in Marketing“ award during the 2017 Franchise Expo organized by Minuteman Press. Currently she manages a staff of three employees and an intern.

An Honorable Mention Growth Award was presented to Manuel Hernandez, Owner, Manny’s HVAC & Home Improvement, Trenton, NJ . Manny came to the US in1980 from the Dominican Republic where he started working in restaurants in New York City. Manny has owned different businesses including a mechanic and auto body shop, a grocery store as well as a promotional company promoting the first Latin Nights in Staten Island. When he came to NJ, he started as a construction manager for MYG management from 2004 to 2006 supervising the renovations of at least 75 properties in Trenton, NJ. He then formed a partnership with Melvin Lebron and they created Lebron Mechanical. In 2013, Manny received a Master License for HVAC and started Manny's HVAC and Home Improvement while maintaining Lebron Contracting.

An Honorable Mention Innovation Award was presented to Christina Jeng, Founder and President, enfoTech & Consulting, North Brunswick, NJ . Christina grew up in Taiwan and earned her law degree from National Cheng Chi University in 1980. She immigrated to the USA in 1982. In 1994, Christina, with other two business partners, created enfoTech & Consulting Inc., which is dedicated to providing IT solutions for environmental protection.

The judges for this year’s Awards were Rashaad Bajwa, CEO of Domain Computer, one of last year’s winners, Dr. Arturo Osorio-Fernandez, Professor of Entrepreneurship at Rutgers University and Lina Llona, Executive Director of the Middlesex County Regional Chamber of Commerce.

The Immigrant Entrepreneur Awards are named for great, historic New Jersey immigrant entrepreneurs. The many nominees represent small mom and pop businesses as well as large corporations; ranging from high-tech firms to professional service providers, from manufacturing operations to restaurant and financial institutions. Combined, they employ hundreds of people and do billions in sales.